I am thrilled to share with you some notes from the composer, John B Hedges, who wrote this piece for me in 2008. I am very passionate about this work, which I have performed with the Youth Orchestra of Greater Fort Worth, the Eastern Washington University Orchestra, the Philharmonia of Kansas City and, in its current expanded version, with the Fort Worth Symphony Orchestra.

It is with great joy that I also share with you three reviews of our recent performances of this work with the Fort Worth Symphony Orchestra conducted by Miguel Harth Bedoya in February, 2012. 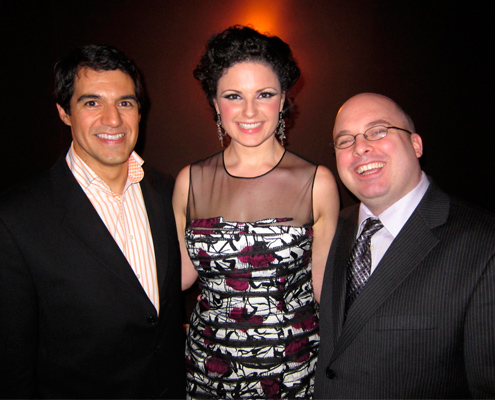 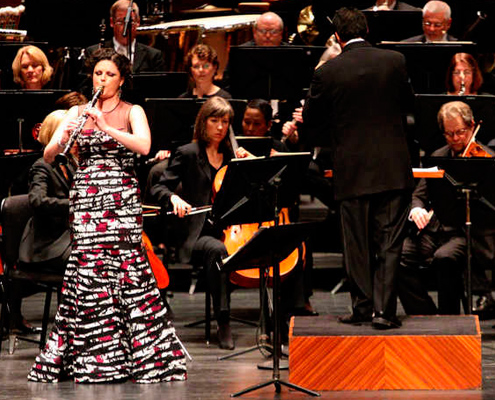 Notes from the Composer:

Fantasia sobre Yma Sumac is a musical fantasy-portrait of Peruvian vocalist Yma Sumac.   Her recordings from the 1950’s may stir emotions, raise eyebrows, cause head-scratching, induce dancing, singing, or unbidden laughter.  Quite often at the same time.  There is something inherently astounding in Yma’s legendary vocal range, stylistic explorations and exotica mystique that could sometimes steer those recordings towards the surreal, absurd or sublime.  However, the crossing of stylistic barriers, musical juxtapositions, and genuine expressive power of her voice are maintained in a tenuous balance which hold the listener rapt.  As someone who is constantly drawn to pull in external musical influences from my life into and to comment on them in my work without losing my identity in a foreign body of sound, Yma Sumac has my admiration and envy.

This work is one of several ‘musical portraits’ I have composed. Each is made up almost exclusively of small moments, groups of pitches and rhythms from the artist’ work as its fundamental material.  These are then utilized to develop a soundworld through which I can explore whatever variety of styles, feels, and emotions which the subject’s work inspires.  InFantasia, Yma Sumac’s exotica, lounge music, mambo, folk melodies, and my own musical language swirl around the virtuosic linchpin of her vocalizations with the solo clarinet serving as surrogate.

In November 2008 Yma Sumac died.  It was coincidentally just two weeks before the premiere of an earlier version of this work.  Her death transformed the piece, and that first performance, instantaneously into a memorial.  Since then the piece has been revised and greatly expanded including the addition of a cadenza and elegiac middle section.  The work was commissioned by clarinetist Victoria Luperi, who will premiere it in this final incarnation with the Fort Worth Symphony Orchestra in 2012.

John B Hedges creates a beautiful clarinet concerto in tribute to Yma Sumac, and the Fort Worth Symphony and Ana Victoria Luperi do it justice. by Gregory Sullivan Isaacs (Theater Jones)

Who was Yma Sumac and what did she have to do with the clarinet?

This question was resoundingly answered on Friday evening at Fort Worth’s Bass Performance Hall when the Fort Worth Symphony‘s composer in residence, John B Hedges, forever joined the two into one with his new composition: Fantasía sobre Yma Sumac for Clarinet and Orchestra.

Sumac was an exotic Peruvian singer who was able to sing notes so high that dogs in the area covered their ears, and then descend into the depths of a basso profundo. She also sang a range of styles from opera to Incan folk music and lounge songs. She claimed to be a princess directly descended from Atahualpa, the last ruler of the Incan empire before the inconvenient arrival of Pizarro and the Spanish army. She even played an Incan princess in the movies, most notably the 1954 Secret of the Incas. Music Director Miguel Harth-Bedoya played a short selection of Sumac singing before the piece was performed, because her voice and style are difficult to describe with mere words.

Hedges’ piece, really a clarinet concerto, pays tribute to Sumac in all of her various aspects. Fort Worth Symphony Principal Clarinetist, Ana Victoria Luperi, took on the persona of Sumac and gave a dazzling performance right from the moment she walked on stage. She was wearing an eye-popping gown, a tribute to the lounge singer part of Sumac’s résumé, that was inspired by the brightly colored fabrics associated with South America. It was tightly fitted except for a pleated kick skirt that started at the knees, and it was gorgeous. Such a contrast to the all-in-black attired orchestra!

The music was also highly colored. Hedges makes amazing demands on the clarinetist and Luperi turned in a stunning performance. All of Sumac’s unique abilities were on display; great leaps, wide ranges, operatic and lounge styles, folk tunes, virtuosic riffs and even Latin-flavored dance. Her weird vocal effects were matched by flutter-tonguing and over-blowing the clarinet. The FWSO was also challenged by Hedges’ music and they played the vibrant and fragmented score with energy and accuracy. All in all, it was a marvelous piece, thrillingly performed, that brought a rousing response from the audience.

Clarinetists are desperately in need of new concerti. Other than the one by Mozart [...] you’d be hard pressed to come up with many more. Hedges has done the instrument a great service by writing this piece. It is modern and up-to-date without assaulting the audience. It has a fusion of classical, folk and pop elements that are both intellectually challenging and crowd-pleasing at the same time. It should be welcomed into the repertoire with a ticker-tape parade.

…Let’s go back to the real headline of the evening – the magic within Fantasia sobre Yma Sumac. The work started off in an unexpectedly wonderful way as Harth-Bedoya presented a surprising moment of audience development by playing a recording of singer Yma Sumac, for whom the piece is written. This not only served for context of what her vocal range was, it also served as wonderful context for the entire work.

Immediately from the opening timpani lines setting the “exotic” stage for clarinetist Ana Victoria Luperi, the audience was whisked away to early Hollywood. While this work was easily as thematic and programmatic as the Prokofiev, instead of giving the audience an easily followed narrative, Hedges presented a very recognizable time, place, and state of mind. But the real magic of the work came not from the Hollywood overture-style orchestration, but instead from Luperi. The choice to voice the clarinet to portray such a versatile singer like Sumac was genius, and Luperi rewarded Hedges at every turn. Her versatility as a player was astounding!

From soaring arioso lines, directly into crass multiphonics representing the extreme low register of Sumac, to dainty floating lines, Luperi could do it all. Hedges sure demanded a lot, and Luperi delivered. At one point, Hedges drops the entire orchestra out for an extended unaccompanied cadenza, and the audience was enraptured on the edge of their seats. When the harp re-entered you could actually hear a collective exhale from the audience that had been holding their breath. Luperi, like horn player Mark Houghton earlier in the season definitely proved to Fort Worth natives that they have some serious young talent within the orchestra. And just like the orchestra sounded their best in Hedges’ Slapdance, and Mark Houghton’s performance, tonight during the Fantasia they were simply “on.”

It is becoming glaringly obvious within this season that this orchestra is capable of great things when performing works that they get excited about – and especially when playing for one of their own. I, for one, cannot wait until the Hedges performance in March.

by Olin Chism, Fort Worth Star Telegram and special to DFW.com

FORT WORTH — It’s not often that a new work by a living composer (and a relatively young one at that) is the biggest crowd-pleaser at a symphonic concert, but that was the case in Bass Hall on Friday night when the Fort Worth Symphony Orchestra presented John B. Hedges’ Fantasia sobre Yma Sumac.

Part of the prolonged applause and loud cheers was undoubtedly a response to the brilliant performance of the orchestra’s principal clarinetist, Victoria Luperi, who was the soloist in this quasi-concerto for clarinet and orchestra. But it’s equally certain that much of it was for the composer, who was present and joined Luperi onstage to acknowledge the ovation.

The fantasia was inspired by the astonishing voice of Peruvian singer Yma Sumac (there’s no truth to the occasional assertion that her real name was Amy Camus — Yma Sumac spelled backward). Conductor Miguel Harth-Bedoya made introductory remarks and had the Bass Hall sound people play part of a Sumac recording demonstrating her amazing range and catalogue of styles. In Hedges’ fantasia, the clarinet stands in for Sumac, and he gives the soloist passages of the sort of virtuosity you would expect, including a substantial cadenza. Luperi breezed through them all, even managing some lyrical statements.

Hedges keeps the orchestra busy as well. There are significant passages for piano, harp, marimba and other percussion instruments imparting a range of styles from what I assume to be South American sounds to even lounge music (Sumac was in part a lounge singer). The atmosphere is often exotic; it surges with energy and consistently appeals to the ear